By Mackenzie Seiffert · · 28 Dec 2021 Comments Off on Christopher Bromwich 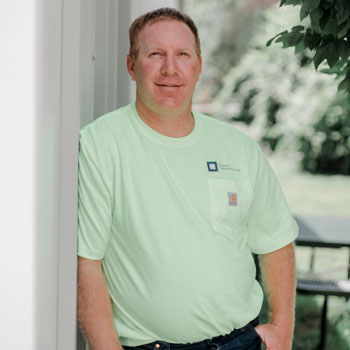 “I realize the team is bigger than myself. I know that if I do my individual job to the best of my abilities, the team at Rhodey Construction has the best chance for success.”

Christopher (Chris) Bromwich joined the team at Rhodey Construction as a General Foreman. Prior to his current role, he worked in several trades. He has been a flooring installer, drywall hanger, residential framer, exterior specialist – and has even run his own company.

His diverse job experience has helped him gain a better understanding of the building process. In addition, due to his involvement in different stages and areas of construction, Chris also has extensive knowledge of deadlines in order to ensure a proper build.

As a General Foreman, Chris works on the layout of the build, assisting others on his team with wall placement. Once sketches and blueprints have been approved, he, along with the rest of the team, get to see the project begin to take shape from its bare bones. At this stage of the process, Chris sees the build as a piece of art that gradually begins to take form. From hospital conference rooms to football fields, Chris has a wide array of project management experience.

For Chris, one of the most enjoyable aspects of his job is getting to meet so many new people. Whether it’s the project managers, on-site foreman or any other employee working on the site, he believes everyone has a life story that’s interesting to hear and skillsets that can contribute to the project.

As a student at Winfield High School in Winfield, MO., he attended the building trades class at Pike-Lincoln Technical Center. He then went on to complete the St. Louis Carpenters Apprenticeship Program.